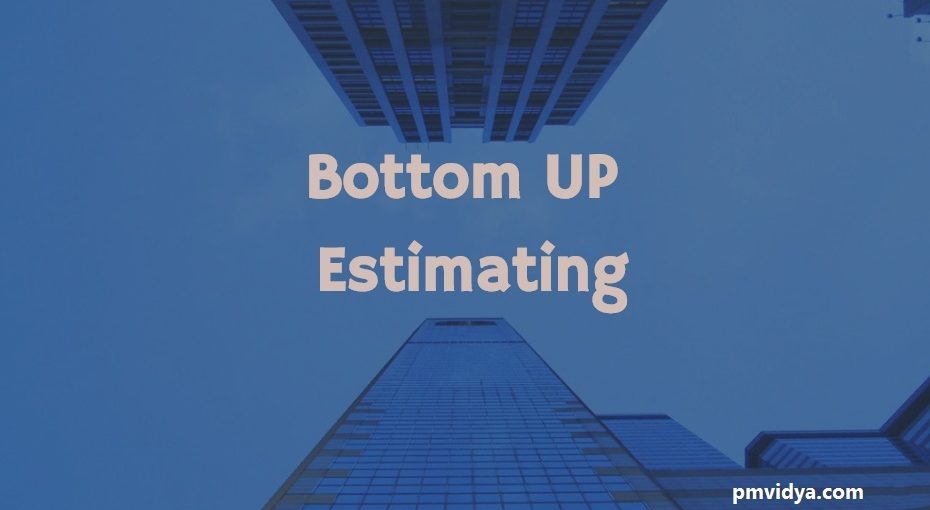 In Project Management, Bottom-up Estimating, as the name suggests, is estimating from Bottom to top. The components of Work Break Down Structure (WBS) are estimated starting from bottom to the top. The cost, duration, or resources of individual work packages or activities, which are located at the lowest level are estimated in detail. When an activity cannot be estimated with a reasonable degree of confidence, then the work within that activity is decomposed further to form more detailed activities. This process continues till you can estimate your activities with reasonable confidence. These detailed estimates at the lower levels are aggregated or summarized or “rolled up” to higher levels to get the total estimate for the entire project. Bottom-up estimating is referred to as one of the most accurate estimating techniques.

Bottom-up estimating is a method of estimating project duration or cost by aggregating the estimates of the lower-level components of the WBS.  When an activity cannot be estimated with a reasonable degree of confidence, the work within the activity is decomposed into more detail. The resource needs are estimated. These estimates are then aggregated into a total quantity for each of the activity’s resources.

How to Do Bottom-Up Estimating?

Bottom-up estimating involves estimating for the most granular component level of a project (e.g. a work package or an activity). In projects that apply PMI methodology, these components have been identified in the processes “create WBS” (PMBOK, ch. 5.4) and “define activities” (PMBOK, ch. 6.2).

The results of these granular estimations are then rolled up to calculate the estimate for the whole project.

There are some interdependencies between these estimations: The duration of an activity typically depends on the resources assigned to the activity. The cost estimates are then calculated by multiplying the resource units with the time and the price per unit.

Advantages and Disadvantages of Bottom-Up Estimating

Bottom-up estimating can be a very accurate method to determine the definitive estimate of a project. It requires a certain amount of resources and an established work breakdown structure. The project must have been broken down to the work package and activities level before you can apply this technique.

Apart from estimating resources, time and costs for the planned work of a project, this technique can also be used to assess change requests, e.g. in the course of a cost-benefit analysis of such changes.

Also check the comparison of the Estimating Techniques.