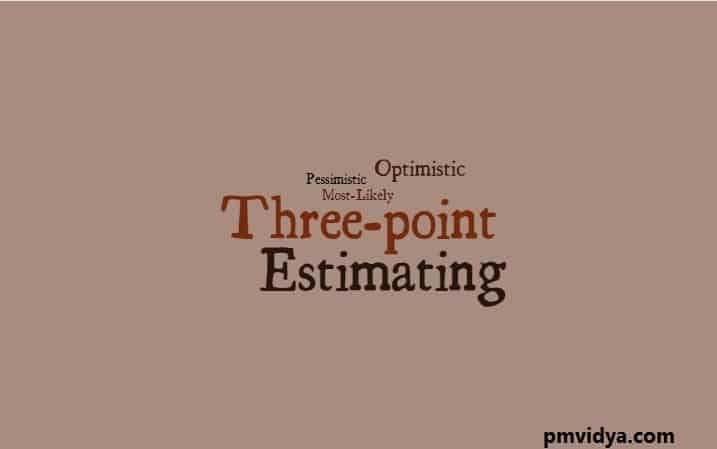 The accuracy of a single point estimate can be improved by considering the estimation of uncertainty and risk. This is where the concept of Three-Point Estimating comes in. It is calculating three different estimates, to factor in risk and estimation uncertainty, and finding their average to get the most optimal estimate.

PMBOK defines Three-Point Estimating as “A technique used to estimate cost or duration by applying an average or weighted average of optimistic, pessimistic, and most likely estimates when there is uncertainty with the individual activity estimates.”.

Three-Point Estimating can be used to estimate both duration and cost.

The Three-Point estimate of duration is called Expected Duration.

The Three-Point estimate of cost is called Expected Cost.

The Three Estimates in Three-point Estimating

It is the estimate based on the best-case scenario for the activity.

It is the estimate based on the worst-case scenario for the activity.

It is the most realistic estimate based on the resources likely to be assigned, dependencies on other participants, possible problems that may arise, etc.

The final Three-Point estimate is calculated by calculating the average of the above 3 estimates. Now, the average can be a simple average or a Weighted average.

The Estimate that uses Simple average is called the Triangular Distribution, on the other hand

The Estimate that uses Weighted is called the Beta Distribution.

The formula for Simple Average or Triangular Distribution is

The formula for Weighted Average or Beta Distribution is

The concept of the three-point estimating originated from the Program Evaluation and Review Technique (PERT), which uses 3 estimates to define an approximate time duration for an activity. PERT uses weighted average.

Other commonly used estimating techniques are –

Also, check the comparison of the Estimating Techniques.