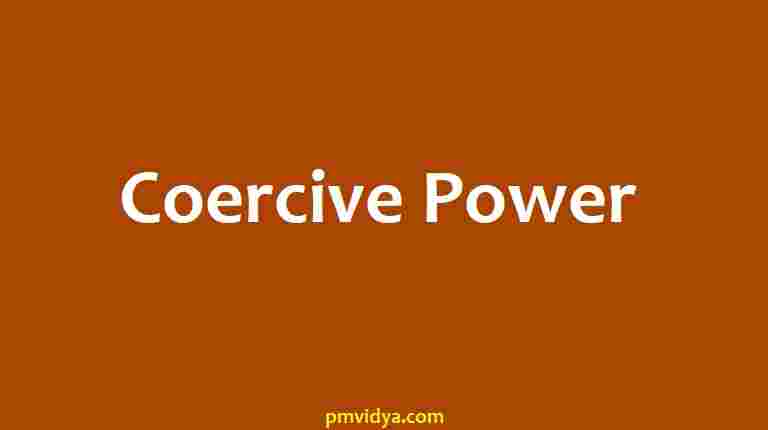 Coercive power comes from one’s ability to punish a subordinate if they don’t comply with the instructions or perform as instructed. Though this power is useful in certain situations, it should always be used very sparingly and only be used as a last option, as there are a number of drawbacks associated with it. In this article, we shall look into Coercive power in detail, its definition, examples, and the advantages and disadvantages associated with it.

Coercive Power in the Workplace

Coercive power is a formal type of power and not a personal power or referent power. It comes from one’s formal authority and ability to punish others. The common examples of Coercive power include threats of Demotion, Bonus cuts, Salary cuts, loss of privileges, Suspension, Termination.

Direct coercion is a deliberate threat by a leader to elicit a specific behaviour.

The key advantage of coercive power is in its ability to force compliance from employees. As such, it is useful in certain situations, as highlighted below:

You should only really use coercive power when you have no other choice and you want to put an immediate stop to negative behaviour. Some of the pitfalls of coercive power include:

Lower job satisfaction: People don’t like when things are imposed on them. Further, no one likes to be micro-managed and resents being under a microscope.

Reduces innovation: as everyone is under a microscope under the threat of punishment there is no room for creativity and innovation.

May lead to Backlash: there is always the threat of a backlash when using coercive power. Employees may eventually retaliate or seek alternate employment, and a high attrition rate is very expensive to an organization.

Only works if used sparingly: Coercion loses its power if it is used as a standard method to get things done in the workplace. It should be used as sparingly as possible

Doesn’t work if you are not able to carry out the threat: In this case, the threat is counterproductive, and your authority as a leader can be undermined. Remember the famous quote “Only a fool makes threats he is not prepared to carry out”.