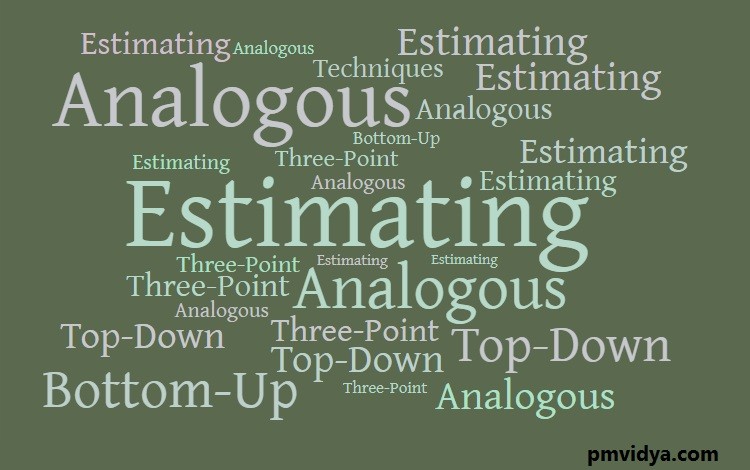 In this article, we shall see the four commonly used Project estimation techniques in detail and their comparison –

Here, the point, using Historical data is the key.

Analogous estimating uses parameters from previous similar projects such as duration, budget, weight, size, complexity etc as a basis for estimating the same parameter or measure of the project in question.

Example: Estimate the amount of duration and cost for building a bridge over a river.

In Analogous estimating we check the Organizational Process Assets (OPA) for any comparable projects that were executed in the past. Suppose we found that a bridge was built on the same river at some other place. Now use your expert judgment and find the approximate duration and cost for building the bridge in question.

So the key point to remember is, In Analogous estimating, you first look for a similar project in the past, get its data, and use your expert judgment to find the approximate duration or cost for your project.

The accuracy of the analogous estimation depends on the degree of similarity between your current project and the project you are comparing it with.

“Bottom-up Estimating” – as the name suggests, this is estimating from Bottom to top. All the components of Work Break Down Structure (WBS) are estimated starting from bottom to the top.

The cost or duration of individual work packages or activities is estimated in detail. When an activity cannot be estimated with a reasonable degree of confidence, then the work within that activity is decomposed further to form more detailed activities. This process continues until you can estimate your activities with reasonable confidence. These detailed estimates at the lower levels are summarized or “rolled up” to higher levels.

PMBOK Definition: Bottom-up estimating is a method of estimating project duration or cost by aggregating the estimates of the lower-level components of the WBS.  When an activity cannot be estimated with a reasonable degree of confidence, the work within the activity is decomposed into more detail. The resource needs are estimated. These estimates are then aggregated into a total quantity for each of the activity’s resources.

This technique is somewhat similar to Analogous estimating as it also uses the historical data in the process of estimating. However, there are differences between Analogous Estimating and Parametric Estimating.

Unlike Analogous estimating, Parametric Estimating uses Project parameters along with historical data to calculate the cost or duration estimates. For example, If it takes $1000 and 10 days to build a 5-foot wall. How many days it will take to build a 10-foot wall of the same length? How much will it cost? Well !! you multiply the previous cost and time by two (size of the new wall is twice) to get the cost and time for the 10-foot wall i.e… $2000 and 20 days.

The accuracy of parametric estimates is less but better than Analogous estimates. However, higher levels of accuracy can be achieved depending upon the sophistication and the underlying data built into the model.

How to do Parametric Estimating?

PMBOK defines Three-Point Estimating as “A technique used to estimate cost or duration by applying an average or weighted average of optimistic, pessimistic, and most likely estimates when there is uncertainty with the individual activity estimates.”.

Three-Point Estimating can be used to estimate both duration and cost.

The Three-Point estimate of duration is called Expected Duration.

The Three-Point estimate of cost is called Expected Cost.

Optimistic (O) – estimate based on the best-case scenario for the activity.

Pessimistic (P) – estimate based on the worst-case scenario for the activity.

Most Likely (M) – It is the most realistic estimate based on the resources likely to be assigned, dependencies on other participants, possible problems that may arise, etc.

The final Three-Point estimate is calculated by calculating the average of the above 3 estimates. Now, the average can be a simple average or a Weighted average.

The Estimate that uses Simple average is called the Triangular Distribution, on the other hand

The Estimate that uses Weighted is called the Beta Distribution.

The formula for Simple Average or Triangular Distribution is

The formula for Weighted Average or Beta Distribution is

The concept of the three-point estimating originated from the Program Evaluation and Review Technique (PERT), which uses 3 estimates to define an approximate time duration for an activity. PERT uses a weighted average. 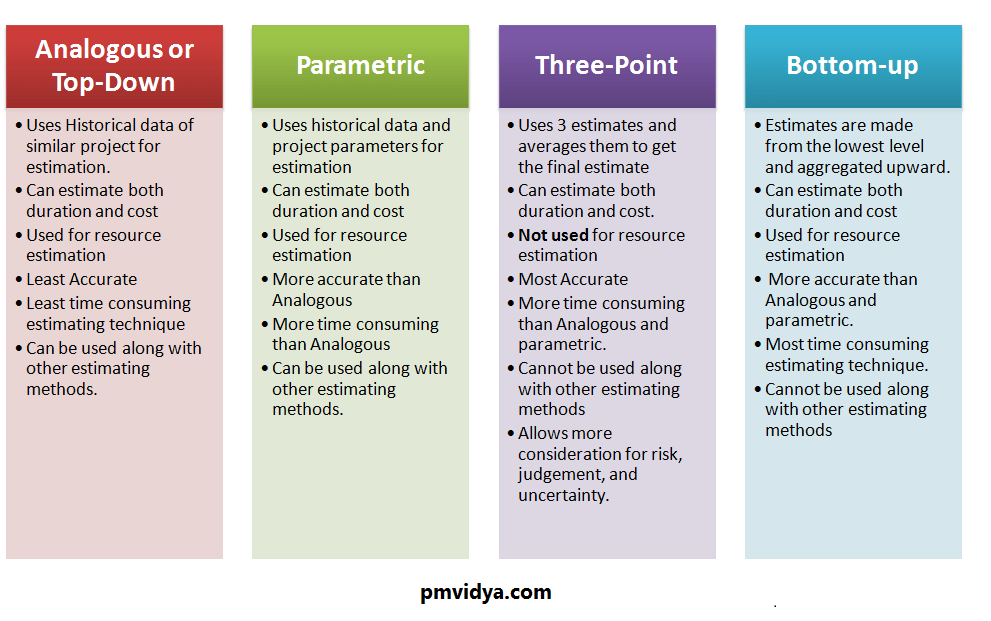